Paramahansa Yogananda, a beloved world-renowned Guru, brought the ancient wisdom of India to the West. In 1920 he was invited to serve as India’s delegate for the International Congress of Religious Leaders that was meeting in Boston. After arriving in Boston, he remained in America traveling and lecturing across the country to thousands of enthusiastic seekers in the largest auditoriums in the country; from New York’s Carnegie Hall to the Los Angeles Philharmonic. These auditoriums were filled to capacity and thousands of hopeful people had to be turned away. Paramahansa Yogananda went on to found Self-Realization Fellowship (SRF) in America and the Yogoda Satsanga Society (YSS) in India in 1920 for the purpose of disseminating Kriya Yoga, a sacred spiritual science that originated millenniums ago in India, for attaining direct personal experience of God.

Paramahansa Yogananda was the first major Indian Guru to remain in America. He settled in Los Angeles, California in 1925 and founded the International Headquarters known as Mother Center on Mt Washington. For the next two and a half decades, he gained fame as he expanded his influence worldwide. He went on teaching-tours, created a monastic order, bought properties for his organization in various California locales, and initiated thousands into Kriya Yoga. Yogananda taught the unity of all great religions in his Self-Realization Fellowships Lessons on Ancient science and philosophy of Yoga and meditation methods for attaining direct personal experience of God. He introduced and spread the teaching of Kriya Yoga, a sacred and spiritual science originating millennium ago in India. Kriya is a soul-awakening technique that had been lost in the Dark Ages and revived by Yogananda’s linage of gurus; Mahavatar Babaji, Lahiri Mahasaya, Swami Sri Yukteswar, who was Yogananda’s Guru Precepter. He was the first prominent Indian to be seen and hosted by a President, as he visited President Calvin Coolidge in the White House in 1927. Due to his renown he was labeled "the 20th century's first superstar guru," by the LA Times. Many prominent figures in the arts, sciences, and business became his followers such as; Mahatma Gandhi, Luther Burbank, Elvis Presley, Ravi Shankar, George Harrison, actor Dennis Weaver, Muriel Hemmingway, and Apple CEO Steve Jobs, who ordered 500 copies of Yogananda’s "Autobiography of a Yogi” to be given to the attendees at his memorial service with the message “Get Realized".

Paramahansa Yogananda lived in the U.S. from 1920 until his passing in 1952, and only visited his native India once, from 1935 to 1936 for twelve-months. While there, he traveled and lectured throughout the subcontinent and helped established a firm foundation for his spiritual work in his native land. He firmly established the Yogoda Satsanga Society (YSS), SRF’s sister organization in India, which now has over 200 meditation centers in all parts of India, in Nepal and in Sri Lanka. YSS also operates schools, provides medical services to the needy on a free basis, and performs emergency relief work. Learn more about YSS at Yogoda Satsanga Society of India. 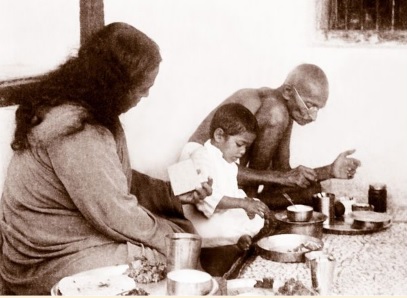 While visiting his homeland in 1935 Yogananda visited Mahatma Gandhi in Wardha on Monday, August 26. Gandhi was observing his weekly Day of Silence on that Monday, so the two spiritual giants communicated by written notes, as seen in this photo. During the following days, at Gandhi’s request, Yogananda initiated him and several of his followers into Kriya Yoga, as written in the hard copy of "Autobiography of a Yogi" on page 428. 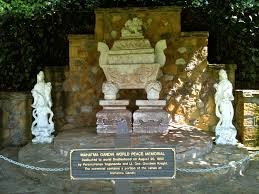 Self-Realization Fellowship Lake Shrine in Pacific Palisades overlooks the Pacific Ocean and is one of the most beautiful gardens in Los Angeles. In 1950 Paramahansa Yogananda took a portion of Gandhi’s ashes, the only portion sent outside of India, and enshrined them in an ancient Chinese sarcophagus and dedicated it as the Gandhi World Peace Memorial under the peaceful lotus towers. Each year thousands of visitors experience the tranquility of this iconic 10-acre site. 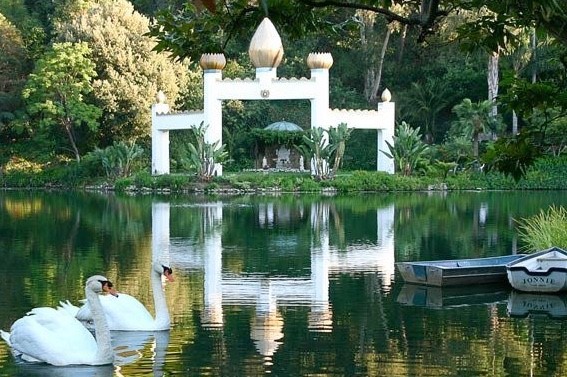 There are now over five hundred temples, ashrams and centers throughout the world. By the time of his famed Mahasamadi in 1952, SRF had over 100 centers in both India and the US. Today SRF has continued to grow with groups in almost every major American city and over six hundred (600) temples, retreats, ashrams and meditation centers around the world. Yogananda’s “plain living and high thinking" principles attracted people from all backgrounds among his followers.

On March 7, 1952 after reading his poem, “My India” at the Biltmore Hotel downtown Los Angeles to a banquet hosting the Indian ambassador in America, Paramahansa Yogananda passed away entering the super conscious state of Mahasamadi, a God illumined Saint’s conscious exit from the body. The effects of this phenomenon were documented by Forest Lawn Memorial Park in their testimony that “No Physical disintegration was visible in his body even 20 days after his death. Yogananda’s body was apparently in a phenomenal state of immutability”. The “Last Smile” photograph was taken just before his Mahasamdhi.